In this guide you can find all buildings in Wolcen: Lords of Mayhem.

Guide to All Buildings

Buildings in Wolcen: Lords of Mayhem is an endgame feature that highlights various structures that can be constructed in Stormfall, building a new structure allows a player to unlock new gameplay features such as a fifth skill slot, more personal stash tabs, the final Aspect of Apocalypse, and many more. This is part of the endgame mode: Champion of Stormfall – this page covers a full list of all the buildings that can be found in the game. 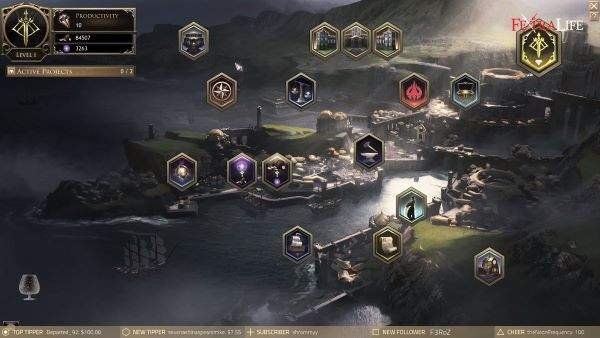 How to Unlock This Feature

The Champion of Stormfall

As regent and champion, players will be given the task to manage the city of Stormfall, this will also give the opportunity to continue to strengthen abilities and stats of the player’s character by completing projects and participating in countless dungeons and expeditions. In order to start your duty, speak to Thunderblade Zalahir or press [ N ] to open the Stormfall Overview Screen

All Buildings in Wolcen: Lords of Mayhem

Stormfall Palace
Stormfall Palace has long been the home of Stormfall’s leaders. It is where the city’s council meet in order to table their concerns regarding Stormfall’s current state of affairs and to debate the merits of new initiatives before they are authorised by the head of state.

Stormfall Institute (West)
The Stormfall Institute was once home to the best and brightest minds that Stormfall had to offer. With the recent discovery of the primordial technology in Anankis, the work usually conducted by the Institute seems more pressing than ever. The West Wing has always focused on research into ancient power sources.

The Main Exhibition was the Institute’s pride and joy, attracting scientists and researchers from all over the continent. When it was destroyed, many of the prized artifacts on display were ruined beyond recovery. However, with the discovery of Anankis, the Institute should have no shortage of curiosities to display to the public.

The Stormfall Institute was once home to the best and brightest minds that Stormfall had to offer. With the recent discovery of the primordial technology in Anankis, the work usually conducted by the Institute seems more pressing than ever. The East Wing has always been devoted to finding and researching ancient mechanisms from all over Wolcen.

In the past, the Cartographical Archives have been a symbol of Stormfall’s exploratory spirit. A vast library of maps, explorer’s journals, and tall tales, the Archives were the first port of call for anyone trying to decipher a treasure map or solve a mystery. In its prime, merchants from all over fought over its contents in auctions.

The Seekers have been around since Stormfall’s inception. As an organization, they are devoted to exploring Wolcen’s wilderness and uncovering its hidden treasures. The garrison ensures that Seekers are at the peak of their physical conditioning, and trains them in the traversal of dangerous terrain.

After the discovery of Anankis, an ill-fated team was established to explore the Primordial megastructure. They returned a number of weeks later, survivors carrying a shrouded artifact. The nobles decided to bury it, afraid of the power humming from its surface…

The Diamond Bank serves as a replacement to Stormfall’s Central Bank, destroyed during the undead rising. A vault within has been designed for your own personal use.

Demetra’s research into enneracts has led her to understand them on a microscopic level. With the equipment in her new laboratory, Demetra now has the tools at her disposal to duplicate enneracts.

Demetra’s Energy Instillator serves the opposite purpose of her Siphon Chamber. Rather than extract magical energy, this device allows her to transfer energy from her stores into the body of a host. She is not incredibly keen on parting with it, but given your status, she is willing to trade it for gold.

Demetra has a keen interest in the magical energies of Wolcen. Since meeting you, she has looked into ways of siphoning these energies from their sources. She has now mastered the process with her Siphon Chamber, and she is willing to trade gold for any surplus energy you may have.

Demetra has perfected a technique that allows her to alter the shape and properties of any items or equipment. She has designed a forge tailored specifically to this task. She welcomes you to throw any unused equipment in the forge in the hopes that it may return something more attuned to your skill-set.

Stormfall’s Shipyard has been the birthplace of some of the greatest ships to ever have graced the open seas. Before it ran into a state of disrepair, foreign dignitaries would visit and watch the shipwrights, marveling at the focus and precision of their work.

The Trade Assembly serves as the main hub for distributing Stormfall’s exports and handling any diplomacy on the city’s behalf. The Assembly’s caravans once traveled to the farthest corners of the continent, and if they could so again, they would help usher in a new age of prosperity for Stormfall.

Before it was buried, the Salt Baths were embedded in a rock face looking out to sea. The water for the baths was drawn from the sea, and many citizens believed that its waters held magical, re-vitalizing energy – they still do.

Refuge for the Blind

A vast, ornate temple, the Refuge of the Blind once served as a spiritual link between Stormfall and the Blind Monks of Morkaї. A small order of monks used to reside there, providing blessings to the people, blessings said to give the receiver the ability to find more wealth in all of their endeavors.